Here is a full Press Release:

“AT&T’s ongoing investment to build broadband networks helps to create jobs, fuel economic growth and enable our customers to quickly access the content that matters most to them,” said Jay Summerson, vice president New York, AT&T external affairs. “Our customers have embraced smartphones and upgrades like the additional 3G spectrum deployment allow them to enjoy the benefits of these devices and mobile broadband for years to come.

The 850 MHz spectrum was deployed for 3G use at more than 1,600 cell sites in metro New York, Long Island and New Jersey. It is considered a high-quality spectrum, which generally results in better in-building coverage. While specific benefits of the additional 3G spectrum will vary by location, AT&T 3G customers should see improved quality and coverage throughout New York City, Long Island and New Jersey where 850 MHz spectrum has been deployed. AT&T technicians nationwide responsible for monitoring network performance for service quality and coverage have seen significant increases in total 3G data traffic in areas where the 850MHz spectrum has been deployed.

“Where we deployed the additional 850 MHz spectrum, we saw an immediate increase in wireless data activity across the AT&T 3G network in those areas,” said Tom DeVito, vice president and general manager for AT&T in New York and New Jersey. “The additional spectrum helps to enhance the 3G network so that our customers have the best experience when they make a call, check an e-mail or surf the Internet on their AT&T device.”

This deployment is one part of AT&T’s ongoing initiatives to enhance the speed and performance of its network. Recently, AT&T announced plans to further upgrade its 3G network nationwide with HSPA 7.2 technology to deliver considerably faster mobile broadband speeds. The upgrades are planned to begin in the fourth quarter, with completion expected in 2011. Additionally, AT&T is continually optimizing and adding cell sites in New York, New Jersey and across the country to maximize performance for customers. AT&T is planning to add nearly 1,900 cell sites nationwide this year, and we’re adding new backhaul connections across the country to support the increasing volumes of mobile data traffic.

AT&T’s 3G mobile broadband network is based on the 3rd Generation Partnership Project (3GPP) family of technologies that includes GSM and UMTS, the most open and widely used wireless network platforms in the world. AT&T offers 3G data roaming in more than 100 countries, as well as voice calling in more than 215 countries.

Across the U.S., AT&T’s 3G network is available in more than 350 major metropolitan areas. For more information about AT&T’s 3G coverage in metro NY or anywhere in the United States, consumers can go to http://www.wireless.att.com/coverageviewer/. The online tool can measure the quality of coverage based on a street address, intersection, ZIP code or even a landmark.

*AT&T products and services are provided or offered by subsidiaries and affiliates of AT&T Inc. under the AT&T brand and not by AT&T Inc.

GeoHot Does it again, iPhone 3GS is jailbroken 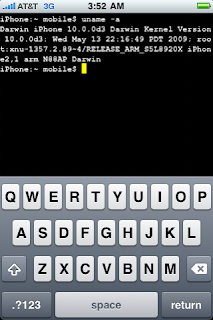 Here is the link with more pics

Congradulation GeoHot and thanks for all your hard work!!!!!!

Pwnage tool for 2.1 and QuickPwn is out 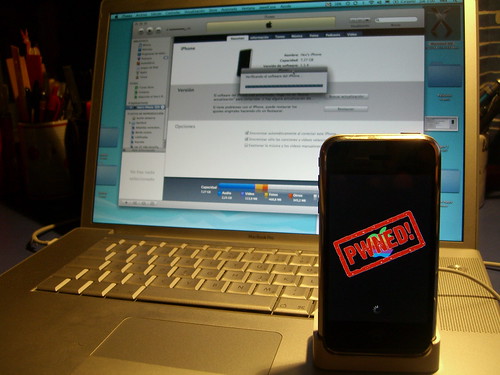 Go get it boys and girls

Well seems our friends at the iphone dev team have a new little goodie for us. QuickPwn now works with 2.0.2 🙂 Enjoy

Some one actually bidding on the iPhone 3G bag on eBay……

So after this weekend fiasco and going to 10 different stores, I was able to be the first person online at Apple store in Huntington Station Mall here on Long Island, they only had the 8GB iPhone 3Gs, but I was already ok with that, as long as I can get one. After giving my phone number and checking my account she got an IRU error, and told me that I have a discount on my ATT account and due to that I have to visit ATT store and purchase it there or take my discount off. 28% Discount…. no way. So ATT store is my only option and since all the stores in Long Island, Brooklyn, Queens, NYC, NJ areas are all out of the phones, I`m stuck. There is an opton of Direct Fullfilment, which means I order it now in the store, pay for it and wait 10-21 days to get it as its on backorder now. I will be looking for it till Friday and then I will do the direct fullfilment thing then. Very Sad news for me 🙁 🙁 🙁

Should of, Could of….

Should of stayed in line, could of had an iPhone….No Luck yesterday ATT store ran out and Apple stores had lines for hours…. Well there is always today.